I began developing the artwork for Salih in January 2020.

I had already researched many media stories across the globe, about refugee families from other countries who were fleeing traumatic circumstances. 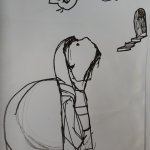 But, as I sat in my studio, working on Salih’s moving story of displacement and loss, I was confronted with a life threatening crisis, unfolding on our own shores, a lot closer to home. These were some of the most catastrophic bushfires experienced in Australia in recent years.

Australian families were forced to flee their homes, many leaving with just their bags on their backs, to be rescued by emergency services in boats and by air and lifted to safer lands.  Not knowing if they would have homes to come back to, or if they would be able to return to live on the land they had always called home.

Our Australian landscape is as brutal as it is transformative, and has forced communities to relocate across the land for thousands of years. Images of families traumatised by forced displacement are universal, no matter the circumstances or places in which they occur.

My connections to Salih’s experience was made apparent, as I realised how the theme of this book could resonate with families everywhere for many reasons. These images hung with me as I began developing the illustrations for this sensitive picture book.

The poses of the frightened families, the vacant gazes and worried expressions of these communities in distress, became a way of connecting to Salih’s visual imagery.

What would you pack in your bag in a crisis evacuation?

How were the children feeling as these traumatic events unfolded?

How did they make sense of the traumatic experiences that impacted their families and challenged their safety? 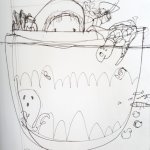 Salih – the child – became the focus for each page of the book.

I tried to make connections with how a child feels when confronted with such difficult life experiences.

How would the event frame the way Salih acted?

What did that look like in Salih’s body language, his gestures and his behaviours?

Most importantly, how did  Salih feel and what was he imagining as he battled the unknown?

This book is about displacement and loss, from a child’s perspective.

What responses would Salih choose, to navigate the path forward?

What would give him strength to endure this journey ahead?

And what strengths could he draw from inside himself, to brave the new world that he faced?